My Dream Job (or Answered Prayers)


I know for a fact that there are people who dream of having my job. I'll resist the basic urge to offer it to them, dirt cheap. I know there are many harder jobs than watching movies and then writing or teaching about them. And I really do enjoy what I do most of the time. This is never more true than when I'm interviewing documentarians. For the most part they are grateful for some attention and, despite the hype that non-fiction film is the "new" rock-and-roll or stand-up comedy or whatever your idea of cool hipness (or hip coolness?) is these days, the vast majority of non-fiction filmmakers don't make much money, don't get much attention and, with the exception of Michael Moore and Morgan Spurlock, don't get recognized on the street.

Talking to documentary filmmakers is usually a pleasure. If you want to sample some of that particular pleasure, you should definitely check out Westdoc On Line. The current featured interview, with the estimable Alex Gibney, is the latest in what is now a collection of fifty such conversations, and the respondents include such major talents as Steve James, RaMel Ross, Ondi Timoner and Tamara Kotevska and Ljubomir Stefanov, the directors of the exquisite Honeyland. 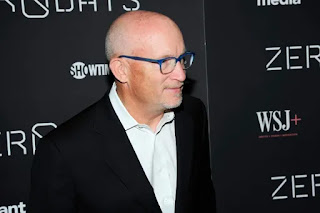 So, something to think about if you find yourself going back to a job that suddenly no longer exists a few months from now.

There's a new(ish) documentary about another poisoned chalice of a supposed dream job that I can recommend heartily. (The film, not the job.) Anthony Desiato grew up in Westchester in the '80s and '90s, a comic-book obsessed kid who hadn't an inkling that he would someday make a sprightly, often charming film, currently available on iTunes and from Amazon, about his most enduring employment experience, working in a comic book shop in Scarsdale, NY.

His new film, My Comic Shop Country, combines his personal story, tracing the rise and fall of Alternate Realities, the store at which he worked, alongside a surprisingly engrossing profile of the industry itself, which like so many other brick-and-mortar/mom-and-pop small businesses, is more or less on life support. As one of the store owners wryly says to him, "You know how to make a million dollars in the comic shop business? Start with two million." 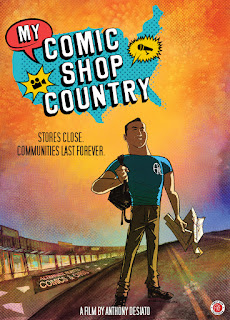 I'd say that's an old joke but as the film makes clear, it's not funny for the shop owners who are feeling the pressure of rising rent, fuel costs and the sheer difficulty of dealing with the unique challenges that the comic book publishers impose on these outlets. Central among these, as the film makes abundantly clear, is the absence of a return policy on unsold books. As a book author and former grievance officer for the National Writers Union, I can tell you that the return policy on books from mainstream, independent and academic publishers is painful for people who see their royalties whittled away by the reserve against return, but it's probably the only reason that indie booksellers can stay alive, returning the unsold and undamaged copies for some percentage of their outlay.

Comic books don't come with that policy -- I suspect that their comparative fragility may be one of the reasons -- so comic shops have to eat their unsold stock. As several of the store owners remind us, that leaves them with reduced margins and a long road to profitability.

I've never worked in retail. That is partly a choice and partly pure chance, but another theme that runs through Comic Shop is occasional thanklessness of the job. If you're seeking glamor, you've come to the wrong place. You will get to meet hundreds of like-minded customers, emotionally and intellectually committed to the comics art, and you very likely may have a chance to speak with your artistic heroes from the creative end of the industry.

But you will also spend countless hours arranging displays, shelving new titles, poring over balance sheets and arguing with the corporate types who populate the biggest operations, DC and Marvel.

In fact, one of the most eloquent interviewees in the film is Peter Levitz, former publisher of DC Comics and a defender of the comic stores who readily admits that the publishers could and should do more in support. Although he soft-pedals the culpability of the big companies, he seems almost sheepish when doing so.

As well he might be. One of the undercurrents running through Comic Shop is the immense importance of hand-selling, the one-to-one conversation of an enthusiastic and knowledgeable store owner or staffer with a customer. Over and over, the film shows us how that works in the real retail world. There is no substitute for it and when these stores disappear, there will be no one else doing it. (Sorry, Jeff Bezos, you don't own the entire world yet.) 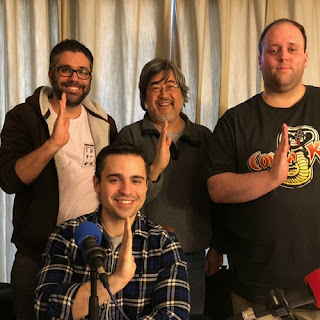 At the heart of the film are a large cast of store owners and staff, whip-smart, funny people who are a walking tribute to their customers and the art that inspires them. I'm an old guy, as regular readers know, although my constant exposure to my undergrad students certainly has kept me from building up the obvious generationally fueled genre prejudices (and I was an avid comic book fan as a teen), but I must admit that I was simply dazzled by the participants in Desiato's film.

It is no small tribute to the filmmaker that every time he cuts away from the contemporary business to walk us through the personal stories of his friends and colleagues from Alternate Realities, my first impulse was mild annoyance. Gradually, however, as their story unfolds, I realized that Desiato's slaying of more personal demons was not just the film's starting point and structuring device. It is the spine that holds the entire movie together, a more intimate look at how some of the issues threatening this relatively tiny industry play out on a daily basis.

My Comic Shop Country ends with a mildly surprising 'reveal' that doesn't alter the film's message in any significant way, but which puts Desiato's personal agenda in a different light, underlining the very human impulse both to remember the experiences and people who shaped us when we were young and to try to preserve the human petri dishes that bred such memories. The result is not only an incisive look at a small, threatened slice of Americana, but a warm and funny portrait of the people who make it worth caring about, regardless of your reading tastes.
- April 05, 2020

Norman Lloyd died yesterday at the age of 106 and, strange as it may seem given his advanced age, I feel quite sad. Lloyd, an excellent char... 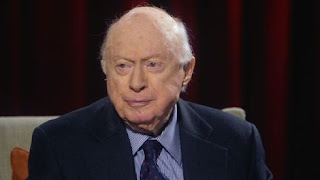