Beanpole, currently streamable on Film Forum's Virtual Cinema, was on many film people's radar before it was selected for "Un Certain Regard" at the 2019 Cannes festival, where the film won the not for best direction. The film's director, Kantemir Balagov, was the product of a directing workshop headed by Alexander Sokurov, and his first feature, Closeness, had also played the sidebar at Cannes in 2017. I'm not sure, however, if anyone was prepared for how strikingly individual and unusual Balagov's vision turned out to be.

When I'm teaching screenwriting I always tell my students not to worry about that elusive goal, "originality." There are only 36 or 7 or 6 stories in the world and you are not likely to increase that number, but you can paralyze yourself with too much knowledge of what came before you. I hesitate to say that I've never seen anything like Beanpole; its story is certainly a brilliant example of how one can re-mix story elements from the past artfully, like recombinant DNA. But when you combine the film's unusual storyline with Balagov's striking visual command, particularly his manipulation of the film's highly stylized color palette, the film looks pretty unprecedented to me. 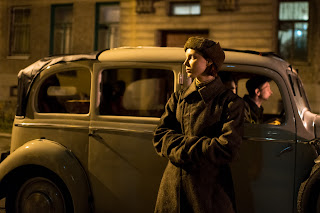 Masha (Vasilisa Perelygna) in the sickly
yellow light of night in Beanpole's Leningrad
The title belongs to the film's protagonist, Iya (Viktoria Miroshnichenko, in a stunning debut). She is a nurse, a veteran of an anti-aircraft unit in Leningrad during the just-completed war. As her name suggests, she is very tall, very thin and very neurasthenic. The first time we see her, she is catatonic, frozen in a fugue state in the middle of a room filled with activity. Gently kidded by another nurse, she groggily comes out of her trance.

Whatever trauma she experienced in the siege of Leningrad, it has left its mark on her. She cares deeply, or so it appears, for a small boy, perhaps her son, leaving him with neighbors or taking him to work, where the patients on a unit for the severely war wounded find the little guy a source of amusement and warmth. And then one night, apparently in one of her trances, she smothers him under her body. 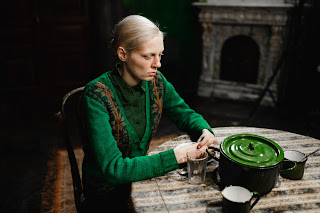 In the midst of this bleak scenario, Masha (Vasilisa Perelygna, another superb debut) her best friend from the anti-aircraft unit turns up, sharing a secret that disrupts our understanding of the backstory violently. And suddenly Balegov and co-writer Alexander Terekhov up-end the seemingly careful framework of the story. Taking us into some fairly dark waters, Beanpole goes in an unforeseen direction, a sudden slip-slide into a series of descents into hell reminiscent of Dante. 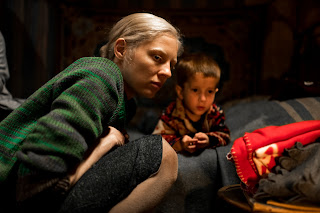 What makes the film seem particularly infernal is its color scheme, a stark opposition of varying shades of red -- from a subdued brick to a corrosive vermillion -- and green veering from a faded earthiness to an almost psychedelic vertigo-inducing acid green. Aided immeasurably by his cinematographer Ksenia Sereda, production designer Sergey Ivanov and costume designer Olga Smirnova, Balegov works these variations in all their possible complexity as we realize gradually that their unraveling is a precise and harrowing visualization of the intimate war between these two women. The result is a series of confrontations that reduce the film's male characters to pawns in a singularly destructive chess match, fools who believe they are in control when they are being manipulated all the time.

I must admit that the film's structure, although linear, feels a bit convoluted at times, although not damagingly so. I suspect that it will require additional viewings on a big screen for it to make sense.

But the film has a visual distinction and is brilliantly acted, compulsively watchable, so I'm eager to go back and see it again.