Interview with a Filmmaker Who . . .

One of the pleasures of doing this job for an extended period of time is that you get to watch filmmakers develop longitudinally. I've been writing about and chatting with Lynne Sachs for something like twenty years. She is a savvy filmmaker whose work straddles the boundaries of experimental, non-fiction and essay films quite adroitly. Her new film, Film About a Father Who, marks the first time in her career that she has had the benefit of a distributor and theatrical engagements, a breakthrough that, understandably, thrills her.

What makes it particularly enjoyable for Sachs is that the film is a jagged-edged amalgam of footage shot over nearly forty years, ranging widely in visual quality, aspect ratio and texture, with no concessions to the mainstream concept of a neat and orderly film. In other words, it's an uncompromising personal documentary, very much a Lynne Sachs film, but one that most audiences will definitely get. Film About focuses on her singularly unusual family constellation, which revolves around the supernova that is her dad, Ira Sachs, Sr. Over the course of 75 minutes and three generations she gives us a series of slow reveals that at first amuse, then shock the viewer. To put it mildly, Dad is not your ordinary family man. (As usual I will eschew spoilers, but suffice it to say, he has more than one big secret.) 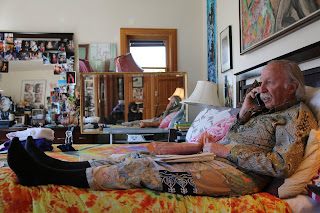 Every bit as important as the premiere of the new film, Sachs is also the subject of a mid-career retrospective at the Museum of the Moving Image, which runs from January 13-31. Among the highlights are new HD presentations of early films -- Drawn and Quartered (1987), The House of Science: a museum of false facts (1991) and Which Way Is East: Notebooks from Viet Nam (1994) -- and the premiere of the latest in her ongoing series of portraits of her children, Maya at 24. For a full listing of the program go to movingimage.us/LynneSachs/.

The interview with Lynne Sachs which is posted here took place last Sunday afternoon via Zoom.

There's a famous exchange between John Ford and a French critic. The interviewer asked Ford why the theme of family was so important in his films. His reply was brusque: "You had a mother, didn't you?"

Sachs had, indeed has a mother. She does make a fleeting appearance in the film, but the title tells you who the central figure is. He's a charmer, a seducer and probably a monster, but Sachs withholds final judgment with the cool detachment of a Jean Renoir. Film About a Father Who shows offer her strengths admirably and is a heck of a good way to begin 2021.