Taking a quick look at the rather meager output on this page during 2020, I was struck by the inadvertent prescience of some of the headlines I'd written. Specifically, ""How Weird is the World Right Now?"  "Polarization as an Excuse for Assassination" and "Can Somebody Please Clean Up This Mess?"

Dylan Thomas once said, "Just because it 'goes without saying' doesn't mean I'm not going to say it." In this case, the House of Representatives is saying it more succinctly than I ever could. 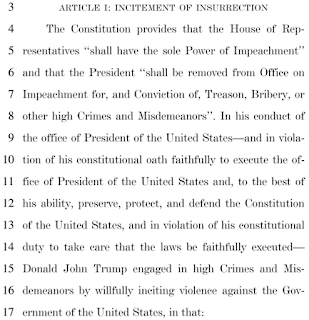 That's not the entire indictment, of course, but you get the idea.
And there is a splendid cinematic context for this. The documentary Boys State, which is attracting a lot of justified praise for its recounting of the model congress staged in Texas annually for interested teens, introduces viewers to, among others, a completely ruthless young man for whom politics is a game devoid of any ethical content. Winning is everything, finishing second nothing, and the only measure of a tactic is whether it works. Needless to say, this has a familiar ring. The film is entirely worthy of your time and can be streamed on Apple+. But before you've seen it, you should read a piece by Roger Berkowitz of the Hannah Arendt Center for Politics and Humanities, which you can access here.

I grew up in Democratic Party politics. My father (of blessed memory) was a county chairman and state vice-treasurer of the Party when I was a boy and I did my first electioneering from a stroller in the nascent shopping malls of Dutchess County. One of the lessons I've carried through life having watched Dad successfully negotiate the shoals of party politics is to distrust people for whom politics is a parlor game, a test of wills in which the outcome of events can be reduced to who wins and who loses.

If I can pass along a little piece of advice to Donald Trump's allies on Capitol Hill courtesy of film and theater, specifically Clifford Odets's The Big Knife, "When you first you scheme, you marry that scheme and all its children." The character, Smiley Coy, who says that is an utterly amoral fixer for a corrupt oligarch. Sound counsel from an unlikely source perhaps, but who knows the smell of offal  better than the butcher?