Film is, perhaps above all, a visual medium and, consequently, relies on the idea of "real presence" as George Steiner put it. In general, the old saw "Show, don't tell" applies here. But what can a filmmaker do when there is nothing to show? Or nothing but ashes.

The still life painting at the center of Slawomir Grünberg's new film, Still Life in Lodz, is something of an oddity. At first glance it seems rather larger than your average still life. Its shape (or aspect ratio for you film people) is strangely reminiscent of the Cinemascope frame, about twice as wide as it is high. The sheer oddness of the painting would make it stand out in most circumstances. And Lilka Elbaum's fascination, almost obsession, with it would be almost as odd were it not for the personal stories wrapped around the painting. Those stories are the substance of the film. 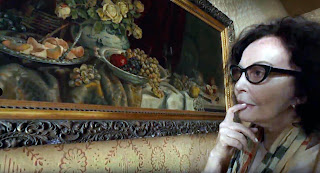 Lilka Elbaum and the eponymous painting

As Grünberg readily agrees in the interview that is posted here, the tragic dilemma facing anyone trying to make a non-fiction film about the Shoah, the murder of six million Jews by the Nazis and their helpers, is that you care trying to recreate a world that is utterly lost, obliterated. Hence my use of the phrase "cinema of absence."

Many filmmakers have approached the subject from many angles. By and large, how well the resulting films resonate depends on how well they have coped with that gaping hole in the center of the story. Those who have relied on archival footage exclusively are, I believe, trapped in the need to eschew mere nostalgia, or are forced to skirt the edges of "torture porn." More than that, they are to some extent prisoners of the sheer familiarity and overuse of many of the most potent images, or the inadvertent glorification of the perpetrators at the hands of Leni Riefenstahl and her ilk.

Claude Lanzmann, in his monumental Shoah (1985), devised a singular, unrepeatable solution. He eschewed any footage from the period, relying entirely on interviews with the survivors, a handful of the murderers and bystanders. He built a massive cinematic machine -- almost ten hours in length -- and the result was a sense of a world too much like our own, in which lush green meadows are underpinned by human remains and the only stories we hear are a reminder of the mortality of the tellers. There are monuments scattered throughout the film, but they are merely empty signifiers that underline the absence of the pre-war Jewish civilizations that once existed in the vicinity. The only other reminder is the railroad, still running on the tracks that transported so many to death. 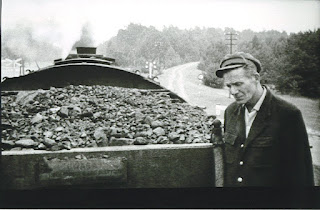 Shoah: The trains are still running . . .
Shoah was, obviously, a one-off. Nobody was going to commit the time, energy and resources that Lanzmann poured into what was clearly for him a labor of duty. But other filmmakers with other stories of the destruction of European Jewry, not to mention millions of Poles, Roma and Sinti, gay men, union organizers and political dissidents, needed (and still need) to find their own way to show what is no longer there.
Grünberg, a veteran non-fiction film and television director with some forty titles to his credit, created a couple of solutions to the problem that show both ingenuity and an understanding of the dilemma. As you will see from our conversation, he puts the painting at the center of the narrative, as does Elbaum for whom the painting is a vivid reminder of her childhood in post-war Poland. More than that, working with local Polish animators, he is able to create a context for Elbaum and her family that both underlines the tragedies of the war years and the obstinate ordinariness of life even for Jews in the afermath.
Therein lies the other strength of Still Life in Lodz. Elbaum was born after the war. Her two companions in the excavation of memory, Paul Celler, an American Jew whose parents survived the Shoah, and Roni Ben Ari, an Israeli artist whose family escaped to Palestine, are second/third-generation bearers of the memories of the whirlwind that engulfed their forebears and, not coincidentally, their families lived in the same apartment complex as Elbaum's in the once very Jewish city of Lodz.
As a result, Elbaum is very specifically a source of memory, and Celler and Ben Ari fill in a lot of the blanks.
And yet, the images of decay and destruction are never far away. Lodz, like most of urban Poland, has had hard times aplenty. The neighborhood in which much of the film takes place is rundown, the apartment complex in question awaiting renovations that it badly needs. The courtyard is virtually waste ground and the film's palette is dark and more than a little grim.
Despite that, Still Life in Lodz feels affirmative, but not in a Pollyanna-ish way. Some scars don't heal, despite generations passing. The film feels a little baggy in structure, in part because Elbaum is the only link between the other two participants, so Grünberg is unable to give the film more unity. That, as any non-fiction filmmaker can tell you, is the risk in making a film without a script, one in which no one knows the ending. Still it's a small inconvenience compared to making a film about a world that no longer is there.
N.B. My conversation with Slawomir Grünberg, which took place last week while he as in Mexico, suffered a little bit from the distance between us. Early in the interview there are a few hiccups in transmission but I think the meaning of his comments is clear.
For information on screenings of Still Life in Lodz go here; you will also find listings of special events including Q&As with the filmmaker and subjects, go here. There are some exciting events coming up, so you should go there right now!
As for Shoah, the main news is that the film, which has long been hard to see, in part I suspect because of its extreme length, is now availableto purchase and rent in the United States and Canada, and will become available for streaming on IFC Films Unlimited in June. It will be available for purchase and rental on the Apple TV app, iTunes, Amazon, YouTube, Google Play, and Vudu in the U.S. and on the Apple TV app and iTunes in Canada.
- March 13, 2021