Tribeca has always been a film festival that focused on diversity and inclusion, from its beginning in 2002.  This year has been no exception but the delayed dates -- the festival usually launches in April but was held off until June -- the coincidence of Pride Month and the festival schedule creates an unmistakable synergy, enough so that the TFF marketing staff have drawn attention to it in their publicity. And between this year's selections and the holdovers from 2020, there is a particularly rich vein of LGBTQ+ form.

One of my favorite films from last year's event was P.S. Burn This Letter Please, a smart, low-key look back at the very underground drag community of New York in the 1950s. The product of an enormous personal archive maintained by an active member of that world, Burn This Letter documents an all-but-forgotten segment of the city's gay subculture in the words, images and artifacts of those for whom it was a haven, and their recollections some six-plus decades later. This is oral history honed to a fine, often funny edge, carried for all of us by some smart, spiky, and deeply proud survivors of the wars that triggered the Stonewall riots, among other things. Directed by Michael Seligman and Jennifer Tiexeira, the film deserves a place of honor alongside such classics as Word Is Out and Before Stonewall.

Last year's award for best documentary feature was won by the gay-themed Socks on Fire, in which filmmaker Bo McGuire used an innovative blend of family footage old and new, blended with recreations to tell the story of his divided family in Alabama, a raucous mix of vehement homophobes and an out gay uncle as they battled over a family inheritance. This year's award for Best U.S. Narrative Feature went to The Novice, a debut feature by writer-director Lauren Hadaway, a tense study of a young, striving student who aims for a place on her college rowing team at any cost. I'll talk about the latter, along with the other feature prize winners, over the weekend.

Why does it matter if there are openly gay, lesbian, bi or trans people depicted on-screen? Or Latinx or African-American or Asian-American or Native American people or people with disabilities. It would be easy to dismiss the question as ignorant or deliberately obtuse, and in the current atmosphere of anti-anti-racist McCarthyism rampant in state legislatures and school boards across the country, it is a temptation. But there is a moment in the sprightly documentary No Straight Lines: The Rise of Queer Comics that puts a smiling human face on the answer to that question. Trans comic book artist Dylan Edwards recalls the first time he saw a comic that featured a trans character, adding, "Look, I exist!"

The importance of visibility for the too-often marginalized is so self-evident that we tend to forget about it. Well, as Dylan Thomas famously said, "Just because it goes without saying doesn't mean I'm not going to say it." That issue is really at the heart of No Straight Lines.

I grew up in a world in which comic books didn't acknowledge the existence of anyone who wasn't a whitebread middle-class heterosexual, superpowers not withstanding. By the time I was old enough to have lost interest in superheroes, that had begun to change. For the dozens of LGBTQ+ comic artists who speak in this film that change was what they had wrought, sometimes with rage, more often with a dry wit, sometimes with a gentleness that combines anger, humor and compassion. 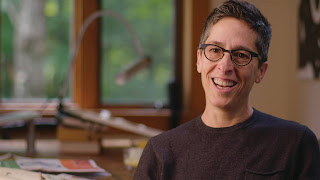 At the heart of the film, adeptly directed by Vivian Kleiman, are five founders, the godfathers and godmothers of queer comic book art: Alison Bechdel (Fun Home), Jennifer Camper (Rude Girls and Dangerous Women), Howard Cruse (Gay Comix and Wendel), Rupert Kinnard (B.B. And The Diva) and Mary Wings (Come Out Comix). Alternating their career trajectories with incisive observations by numerous others, Kleiman gives us a smart, joyous and entertaining precis of the rise of the underground comix, a phenomena that was frequently spearheaded by their queer practitioners, the gradual shift by many of the creators into the multi-leveled territory of the graphic novel,  the rise and fall of key markets like the alternative press and other print vehicles and the survival of queer comix in the cyber-wonderland of the Internet.

Kleiman collaborated earlier in her career with the late, great Marlon Riggs, and like him she has a wonderfully nuanced understanding of the delicate crossroads where the libido intersects (and occasionally crashes into) the politics of solidarity, identity and art. The film that results is both a joy ride and a pride parade (as well as a Pride Parade). Highly recommended.