Worth Leaving the House, Even in the Rain

One of my favorite films of the year (so far) is getting a pre-release public screening tonight at the JCC in Manhattan (76th St. and Amsterdam Avenue). Joan Sfar's second feature, The Rabbi's Cat, played the New Directors/New Films series a couple of months ago and at the time I wrote: 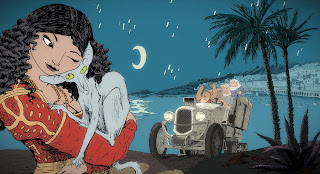 The Rabbi’s Cat is Joann Sfar’s second directorial effort (this time in collaboration with Antoine Delesvaux) and it’s a definite upgrade from his Serge Gainsbourg biopic, if only because the energy never flags and the eponymous hero has none of Gainsbourg’s questionable behaviors. The cat, who has no name, is a creature of pure appetite, given to eating fish and birds without hesitation. (Come to think of it, he’s more like Gainsbourg than I thought, but he doesn’t do drugs or booze.) After apparently eating the rabbi’s parrot, he gains the ability to speak and almost immediately adds two new tricks to his repertoire, Talmudic disputation and lying.

Adapting his own books for the film, Sfar has concocted an entertainingly elaborate story that combines such classic elements of children’s adventure as a quest for a lost utopian city, a hunt for treasure and a close-knit band of friends to share it all with. Sfar and Delesvaux also have an eye on the adults in their audience and the film is as rich in its supply of inside jokes as the classic Warner Brothers cartoons of the ‘40s and ‘50s, ranging from a playfully snarky homage to Tintin to a rather pointed dig at Russian monarchists. The underlying message of the film is one of tolerance for diversity and for feline desires for fish, both of them admirable themes energetically enacted.
The screening starts at 7:30 p.m. I have no idea when the film will get a theatrical run, although it deserves one, so grab it while you can.