The combination of Chantal Akerman and Joseph Conrad is certainly more counterintuitive than her link with Marcel Proust. When Akerman filmed The Captive, I don't think anyone was particularly surprised. But when she was announced for a film of Almayer's Folly, it came as a minor jolt to me, of no one else. the film is now playing at Anthology Film Archives and I must admit that having seen it, the book and its author make perfect sense as an Akerman project. I think her reading of Conrad is rather more against the grain than her adaptation of Proust, and in some way that makes the film quite a bit more interesting.

What follows is a review I wrote for this week's edition of The Jewish Week. For reasons of space, the piece didn't make it into the paper but I think you will find it worth a bit of your time. 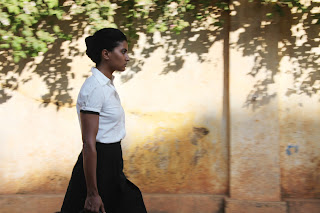 In 1985 Gayatri Chakravorty Spivak published a key work “Can the Subaltern Speak?” The essay, which redefined the entire direction of the nascent academic field of post-colonial studies, argued that “everything that has limited or no access to the cultural imperialism,” her description of the “subaltern” in a later interview, is rendered incapable of being part of a dialogic relationship with its oppressors.  Although the example she chose to make her point was that of Indian widows who underwent sati, ritual burning on their husbands’ funeral pyres, it would be obtuse not to see that she is concerned with a vastly wider range of people subjected to institutionalized silencing, victims of patriarchy, racism or class oppression.

One hesitates to add anti-Semitism to that list. Not that Spivak isn’t sensitive to its appalling nature, but the cultural position of the Jew in Christian society historically is subtly different from the subalterns of empire, if only because Christianity owes its very existence to Jewishness. However, the end result isn’t all that different.

Chantal Akerman must have recognized all of this as background to her latest feature film, Almayer’s Folly, which opens on August 10. Akerman is a Jew, a woman, a sometime lesbian and the daughter of a Holocaust survivor. Speaking of her mother’s tattooed number and the dark silence that accompanied it, I have written, “It was . . . etched as indelibly in her subconscious as it was on her mother’s skin, and that number and all it meant has been a deeply buried reality in Akerman’s films, even a movie that never mentions Jews or the Shoah.”

If Almayer’s Folly isn’t a perfect expression of that reality, it comes close, and the Spivak essay, whether Akerman is conscious of it or not, is a guiding voice that frequently overwhelms that of the novel’s author, Joseph Conrad. There is a nicely covert homage to Conrad by way of his compatriot Chopin in one of the film’s lighter moments, but the film’s credits describe Akerman’s screenplay as “freely adapted” from the book, and it certainly is. Where Conrad’s focus is on the foolish and feckless dreams of Almayer (Stanislas Merhar), a failed trader stranded in a decaying mansion in the Dutch East Indies, Akerman is more concerned with the gradual alienation of his beloved daughter Nina (Aurora Marion). What Conrad sees as a heroic act of renunciation by Almayer becomes the womanly defiance of his daughter for Akerman.

Akerman’s fiction films have always focused on how women deal with their own suffocation by patriarchal institutions and quotidian drudgery, from the slow-burning madness of Jeanne Dielmann to the comic quandaries of woman at the center of the ménage-a-trois in Night and Day. On some level, Akerman’s previous fiction film, The Captive, a quirky modernization of Proust, could be read as a dry run for Almayer’s Folly, formally rigorous, frequently witty but in deadly earnest in its exploration of the silence of the victimized. By contrast, her documentaries are concerned with the nature of the Other; in interviews she has cited the Other-obsessed Jewish philosopher Emmanuel Levinas as an influence. Almayer’s Folly combines the two themes admirably.

From the outset of the new film, Akerman makes it clear that she is aiming at something radically different from Conrad. Her version is set in a timeless yet contemporary place in the developing world (actually, Cambodia), a place of gaudily lit dancehalls and a distinctly urban kind of decay, an hypnotically colorful counterpoint to the shadowy world of Almayer and his dilapidated, unfinished mansion in the jungle. Where Conrad offers the somber voice of an omniscient, starkly judgmental narrator who, while not overtly racist, certainly reflects a “white man’s” viewpoint, Akerman eliminates most of the novel’s narration but, tellingly, gives the little she has retained to one of the non-white characters, spoken at the end of the opening sequence, when he is off-screen.

It is only then that you begin to see one of the carefully concealed but immensely important motifs that structure Akerman’s Almayer’s Folly, that the least Westernized characters are seldom seen speaking on-screen. And they don’t say much, not even Almayer’s wife, half-mad from his rejection of her and the brutally deracinating aspects of her adoption and education by Europeans. By contrast, in the film’s first half, Almayer almost never shuts up and absolutely never listens to non-whites.

For the first of the film’s two hours, it is lushly gorgeous (beautifully shot by frequent Akerman collaborator Remon Fromont) and as stylized as a religious rite. The decision to shift the action to a vaguely contemporary setting changes the thematic ground by making the action literally post-colonial, but in doing so Akerman deliberately calls attention to all those readings of Conrad by people like Spivak and Edward Said that situate him in the world-system of the European empires of the “long 19th century,” as historians occasionally call it.

Which is how, to come full circle, I suddenly realized the connection between Akerman and Spivak. The second half of Akerman’s film is oddly hesitant and occasionally repetitious, but it has a certain cumulative power, and it seems to offer an answer to Spivak’s famous question, one that is subtly different from the scholar’s own analysis.

Can the subaltern speak?
Perhaps not. But she can act, and when she asserts her otherness, it will leave an old white man to mourn.

That is, I think, a message entirely consistent with Akerman’s fascination with the component parts of identity, Jewish and otherwise, and Otherwise.

Back. Again. Yet Again.

It has been a strange, long and difficult year so far. I began the year with kidney stones and have spent the entire summer recuperating from carpal tunnel release surgery. Since the first of the year I have lost a good friend and colleague, Damien Bona, a fellow founder of the Iras, Andrew Sarris, in so many ways my intellectual mentor, Chris Marker, whose work redefined my understanding of the cinema and what it can do.

It hasn't all been sadness. I'm halfway through my first year as artistic director of the Washington Heights Film Class, and that has been a splendid reminder of why I came to this party in the first place. I always find it refreshing to teach a basic film appreciation class, because it forces me to re-examine first principles, and that is something every critic should do frequently.

The result, however, of the various highs and lows of the third year thus far is that has been difficult to keep up with this blog, in part because of my own personal what-have-you, and because I haven't been going to that many movies. I'm not going to make another of my biannual or monthly promises to be more diligent, but there are a sufficient number of exciting new films on the horizon and I hope that will motivate me to post more often.
- August 11, 2012 No comments: