An Added Head's-Up on the Holland Film

Joking aside, I was informed that Burning Bush (see below) is available for streaming on Fandor.This is another one of those art-film based sites that allows you to watch a very juicy catalog of films at your computer. You can even stream them to your television set (although I'm still trying to figure out how to do that myself). So wherever you are, you have no excuse for missing out on the Agnieszka Holland. Go to it -- you have been so ordered.


When her brilliant Shoah drama In Darkness was released theatrically in the U.S. a few years ago, Agnieszka Holland told Jewish Week, “Even the effect of a kitschy television series like Holocaust – it changed the vision of Americans and Germans on this subject. Perhaps for educational purposes even embellishment is better than complete silence.”

At the time, Holland was beginning work on a mini-series of her own for HBO Europe, a recounting of the tragic circumstances surrounding the death of Jan Palach, a Prague college student who immolated himself in protest against the Soviet invasion of Czechoslovakia in 1968. Holland was in Prague at the time studying film, became active in the protests despite being a Polish national, and even spent some time in jail. She brings the immediacy of the eyewitness to Burning Bush, the four-hour film that results.The film is having its theatrical release today at Film Forum.

Palach’s death set wheels turning throughout the subterranean worlds of Czech/Soviet communism, with pressure from Moscow and from anti-reform hardliners in Prague putting local police officials under the gun. At the same time, the heat would come down on the students who were organizing in support of the Prague Spring reformers and against the Soviet tanks in the streets. The match with which Palach incinerated himself burned a lot of other people almost as badly, including his apolitical mother and brother. When a prominent mid-level hardliner denounced Palach as a stooge for right-wing conspirators, they had the nerve to sue him for defamation. The lawsuit and its aftermath provide Holland with a compelling armature on which to examine the wide range of choices facing people in a police state. Brilliantly acted by a splendid ensemble cast of Czech veterans, this is the kind of project that lesser filmmakers would make into a stentorian marching song; in Holland’s hands, it is subtler and more profound. 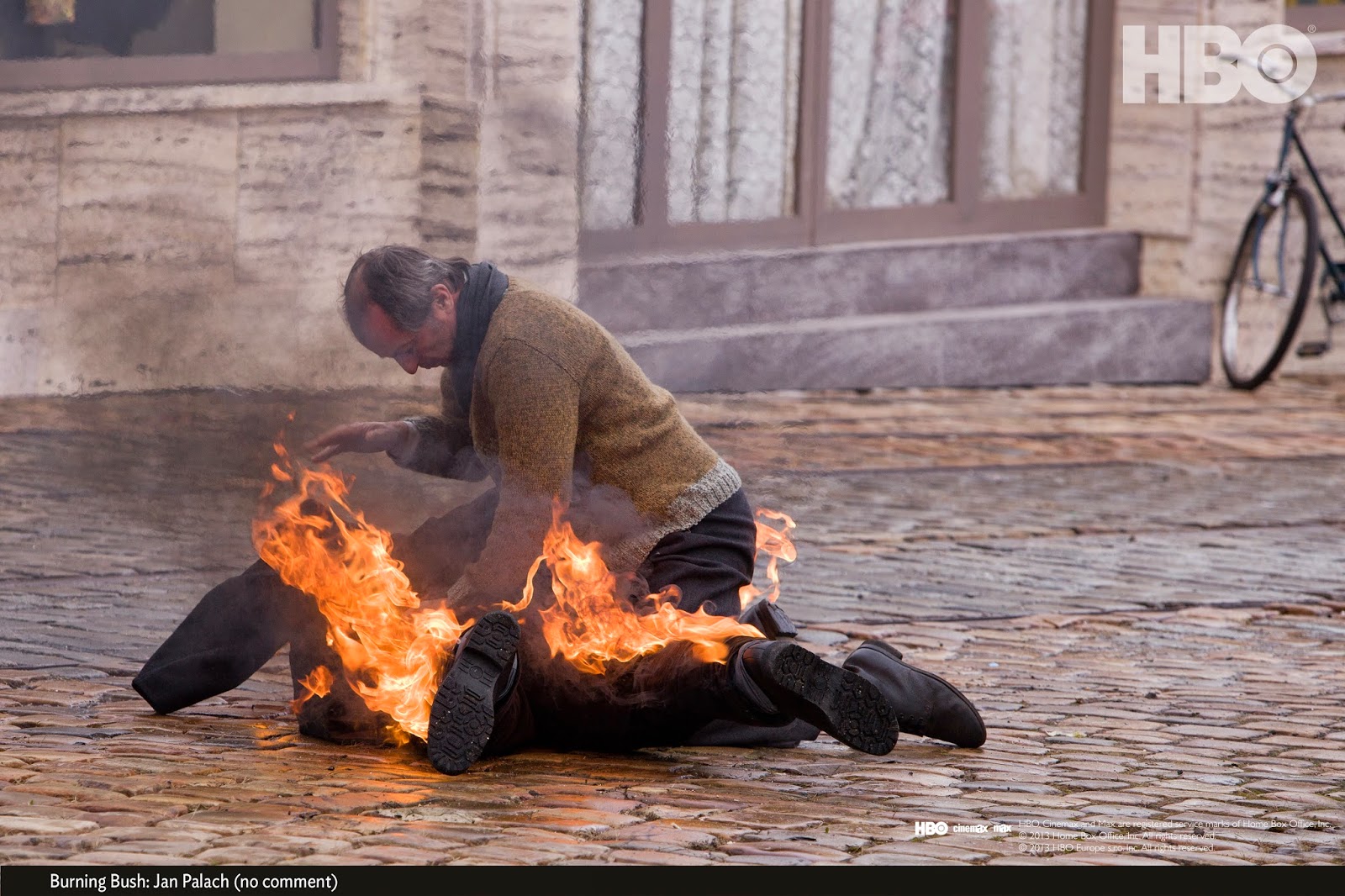 Burning Bush is almost as visually shadowy as In Darkness, but here the difficulties of vision become more metaphor than reality. Where the earlier work uses splashes of light to highlight the emotional barriers between the various Jewish families hiding from the Nazis, here there is an overall grayness that suggests a world of moral ambiguities in which one seldom has clear-cut choices as the pressure to conform and to collaborate becomes intense, even lethal. Experienced as a four-hour motion picture, the project is claustrophobically intense; as a three-part teleplay it might be less harrowing and therefore less effective.

By purest happenstance -- which is the way these things usually happen, this weekend also marks the simultaneous openings of the Israel Film Center Festival, Kino! Festival of New German Films, and Nadav Lapid's wild-and-woolly feature Policeman.

Needless to say, your intrepid reporter was on the scene(s) and I can honestly say that this is a heck of a good week to be a film lover in New York City. If you want to read more, I suggest you should, you can find my Jewish Week story on these three events here.
.
- June 11, 2014 No comments: