Frederick Wiseman Shows How It's Done

My monthly culture column for Jewish Week appeared a week or two ago and, for some unknown reason, never seemed to make it onto the newspaper's website. After last night's stealth pardon of serial Bill of Rights violator Joe Arpaio by the Commander-of-Thieves, it seems more relevant than ever and well worth repeating here.

Here's what I wrote:


In a democracy the major institutions are created and shaped by something like the will of the people. At their best, they are responsive to a multiplicity of pressures  reflecting the manifold interests operating in a diverse  society. It’s a maddengly imperfect system and one that in recent years responded less to the needs of those who cannot wield great economic power and the political clout it bestows.

What brings this thought to mind is the unplanned but felicitous collision of Donald Trump’s call for massive cuts in legal immigration earlier this month with the early September schedule of Film Forum, which features the latest offering from Frederick Wiseman and the continuation of a retrospective of his work.

Wiseman is one of the last of the pioneering documentary directors who created and sustained the tradition of “direct cinema,” using lightweight cameras and sound equipment to gain unprecedented access to significant moments in history or, in his case, the daily life of great institutions. Wiseman’s work seldom touches directly on Jewish topics -- although his brilliant essay in fiction film, “The Last Letter” does so with exceptional power -- but his attitude and interests bespeak a personality steeped in Jewish ethics and values, for tikkun olam.

Consider a brief passage midway through his 2015 masterpiece “In Jackson Heights.” We see a few minutes of a typical workday in the office of Councilman Daniel Dromm. Two of Dromm’s staff are fielding irate calls from constituents. We hear only their side of the conversations, so it takes a moment before it becomes clear what very local issue the callers are discussing. But it is impossible to miss the interplay of exasperation, concern and slowly eroding patience in the faces of Dromm’s long-suffering staffers. In that single scene, Wiseman encapsulates brilliantly the microphysics of democracy, the personal side of the political and vice versa. I can’t think of another filmmaker working in either dramatic features or non-fiction films who better understands this reality or conveys it more succinctly. For the system to work at all a downright Talmudic balance must be reached. 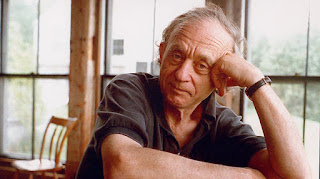 
Wiseman’s new film, his 43rd since 1967’s landmark “Titicut Follies,” focuses on a typically diverse projectat the heart of New York City’s wildly variegated cultural gumbo. “Ex Libris: The New York Public Library,” which opens September 13, offers an extended look at an essential part of the life of the city. As a repository of knowledge in printed, digitized, microfilmed and other forms, the NYPL is exemplary, but its role as a place in which the newly arrived can ease their way into the city is no less important. The library offers English classes, computer classes, children’s programs, emanating from 92 branch libraries across Manhattan, the Bronx and Staten Island, not to mention free computer time and wi-fi, concerts, author talks, art exhibits and more.

As such, it represents a perfect subject for Wiseman’s camera and sound recorder, a blend of the micro and macro and a useful reminder of how American democracy should function, responsive to the needs and desires of both the many and the few. Taken in tandem with the older films on show from September 6 at Film Forum, ranging from “Central Park” to the epic tetralogy, “Deaf,” “Blind,” “Multi-Handicapped” and “Adjustment and Work,” Wiseman’s body of films offer a unique insight into the complex dance that is required of a pluralistic democratic nation.

That dance, as any Jew should know, is predicated on society’s willingness to welcome and to accommodate new arrivals. One need not have Wiseman’s level of access to institutions in order to read the historical record. Nations that accept and acclimate bearers of unfamiliar cultures are the ones that thrive. Without debating the substantial negatives of the Roman, Ottoman or British Empires, each of those was a long-lasting political, cultural and social phenomenon whose impact outlived its existence, enjoying unprecedented periods of success, power and influence.

For a number of reasons, I would rather not see the United States continue down the imperial path on which we have already traveled too far. But as a haven for the tired, the poor, the “huddled masses yearning to breathe free, the wretched refuse of your teeming shore. . . . the homeless, tempest-tost,” we’ve done pretty well. Reducing the number of such people that we accept or changing the basis on which they are admitted to one centered on their ability to fill a transitory economic role, in short, the plan offered by the current administration, would not only betray the meaning of this country but would obviate the need for the democratic institutions that Frederick Wiseman has painted in all their glorious, flawed strivings.

Incidentally, I saw Ex Libris earlier this week. I thoroughly enjoyed it and will comment at greater length after its premiere on September 6.