I'm in awe of people who can churn out a blog post every day. Not the ones who are getting paid for it. That I can do.

I mean folks who don't write for a living, who see no recompense other than the sight of their own words on-line.

I mean, well, they're nuts, but I'm envious and impressed.

Which is by way of saying I'm back again, spurred on by the annual return of the Yankees to the Bronx and the Tribeca Film Festival to lower Manhattan. (I"d feel more sanguine about the former if they'd start hitting with some consistency, but that's a subject for another time and, frankly, another blog.)

Tribeca, on the other hand, is a pure pleasure. In any large film festival you can expect a mix of the good, bad and the indescribable. Obviously, a festival in which the selectors are consistent and the choices more in the first category than the second is to be preferred to the other way around. But as George S. Kaufman memorably observed "One man's Mede is another man's Persian," and it is impossible to imagine a festival in which every new movie was a masterpiece (or a mess, for that matter). The best one can hope for is a stressless movie-going experience and, happily, the big NYC-based festivals are pretty good on that count. Given that Tribeca, now in its 17th year, is the baby of the bunch compared to NYFF and New Directors, their track record of making film journalists feel at home is admirable. (You can find all the info you need for the festival here.)

So coming back to this lemonade stand to cover Tribeca (and one hopes, to resume the more regular filling of this tiny piece of cyberspace) is not too onerous a task.

Of course, I had a head start, since my Jewish Week round-up for the Festival is already on-line here.

Since that piece was filed, I have seen Blue Note Records: Beyond the Notes, and will be hitting the festival scrreening spaces hard over the remainder of the event. And if everything I see is as good as Blue Note, I'll be a very happy critic.

Full disclosure: the second LP I ever bought was Lee Morgan's Search for the New Land, a Blue Note recording that I still own and listen to frequently. During my brief time singing jazz with a small combo, we drew heavily on the bop repertoire, but leavened with a lot of Blue Note hard-bop material. My ideal record label setup would be the Blue Note of the '50s and '60s with its large roster of great instrumentalists who were encouraged to record new material frequently, paid for rehearsal time and urged to break new ground.

One of the nicest surprises about Sophie Huber's splendid new documentary film for me was fidning out that the reality matched my dream pretty closely. Although all of the older musicians interviewed have anecdotes about the occasional difficulties of working with label co-founders Alfred Lion and Francis Wolff, two Jewish refugees from the Nazis, the overwhelming sentiment that emerges from them is affection for the men and great respect for them as business associates. The history of white-owned record labels ripping off black artists in America is depressingly long, but this is one of the standout examples of men who loved the music but also the musicians, and treated them accordingly.

My first expectation for this film was that given the vast number of Blue Note alumni who are deceased, Huber would be forced to fall back on file footage, interviews with jazz critics and a preponderance of material about the reborn label and its current roster. Happily, she focuses a lot of her attention on Lou Donaldson, Herbie Hancock and Wayne Shorter, three of the survivors, and the bulk of contemporary studio footage takes in a session with the current version of the Blue Note All-Stars, with Robert Glasper proving a particularly witty and articulate inteview subject. 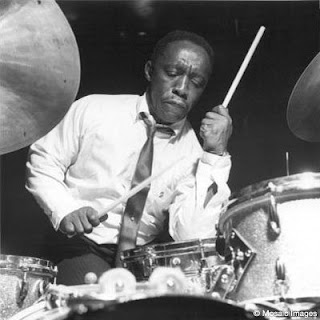 Art Blakey at full throttle, as seen by Francis Wolf


The film covers all the high spots of the label's history, from its opening salvos in the boogie-woogie craze in the early 1940s to the arrival of bop and its glorious permutations, most of them midwived by Lion and photographed by Wolff. Of course, we get plenty of Mon, Bud, Blakey et al. And the footage Huber and her crew have found is exemplary and mostly unfamiliat (to me, at any rate).

And, for once, this story has a happy ending, with Bruce Lundvall, Michael Cuscuna and Don Was among those who brought the label back to life as a healthy independent, and musicians like Glasper, Lionel Loueke and many others inventively blending the classic Blue Note sound with hip-hop.

The result is a pure delight.