On a New Note, a Blue Note

Blue Note Records: Beyond the Notes played the Tribeca FF in 2018, and I reviewed enthusiastically back then. The review is immediately below. The reason for bringing back this posting is simple: the film is opening on June 14 at theMetrograph (7 Ludlow St.), and you really ought to see it. You can check out the film’s trailer on YouTube: https://www.youtube.com/watch?v=irsNs_19zo8
That said, here’s what I wrote about the film last year.
Full disclosure: the second LP I ever bought was Lee Morgan's Search for the New Land, a Blue Note recording that I still own and listen to frequently. During my brief time singing jazz with a small combo, we drew heavily on the bop repertoire, but leavened with a lot of Blue Note hard-bop material. My ideal record label setup would be the Blue Note of the '50s and '60s with its large roster of great instrumentalists who were encouraged to record new material frequently, paid for rehearsal time and urged to break new ground.

One of the nicest surprises about Sophie Huber's splendid new documentary film for me was finding out that the reality matched my dream pretty closely. Although all the older musicians interviewed have anecdotes about the occasional difficulties of working with label co-founders Alfred Lion and Francis Wolff, two Jewish refugees from the Nazis, the overwhelming sentiment that emerges from them is affection for the men and great respect for them as business associates. The history of white-owned record labels ripping off black artists in America is depressingly long, but this is one of the standout examples of men who loved the music but also the musicians, and treated them accordingly.

My first expectation for this film was that given the vast number of Blue Note alumni who are deceased, Huber would be forced to fall back on file footage, interviews with jazz critics and a preponderance of material about the reborn label and its current roster. Happily, she focuses a lot of her attention on Lou Donaldson, Herbie Hancock and Wayne Shorter, three of the survivors, and the bulk of contemporary studio footage takes in a session with the current version of the Blue Note All-Stars, with Robert Glasper proving a particularly witty and articulate interview subject. 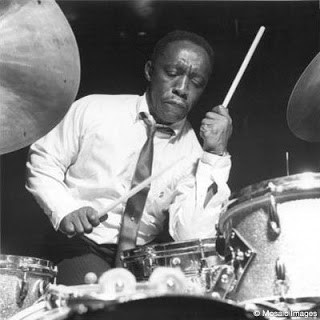 Art Blakey at full throttle, as seen by Francis Wolff


The film covers all the high spots of the label's history, from its opening salvos in the boogie-woogie craze in the early 1940s to the arrival of bop and its glorious permutations, most of them midwived by Lion and photographed by Wolff. Of course, we get plenty of Mon, Bud, Blakey et al. And the footage Huber and her crew have found is exemplary and mostly unfamiliar (to me, at any rate).

And, for once, this story has a happy ending, with Bruce Lundvall, Michael Cuscuna and Don Was among those who brought the label back to life as a healthy independent, and musicians like Glasper, Lionel Loueke and many others inventively blending the classic Blue Note sound with hip-hop.

The result is a pure delight both cinematically and sonically.

Yes, I hate to be type-cast as that guy who writes about Jews and movies. I started out as a film critic almost 50 years ago (March 1971, to be exact) and my first reviews were of The Deserter (Burt Kennedy), Rio Lobo (Howard Hawks) and Stolen Kisses (Francois Truffaut). Not a single Member of the Tribe. But, as I have frequently observed, being a freelance writer is like being a migrant farm worker; you go where the crops are. For the past 25 years I've been the film critic for Jewish Week in NYC, and it's been a very satisfying ride so far. I've been a critic-in-residence at several Jewish film festivals and written on Jewish and Israeli film for Hadassah Magazine and many Jewish newspaper.

So Tuesday and Wednesday next week I'll be happily in attendance at the biennial conference of the Jewish Film Presenters Network. It's a gathering of most of the top names in the Jewish film world, programmers of major Jewish film festivals, JCC film events and the like, and numerous filmmakers will be present. For information, go here.

Maybe I'll see you there. If so, say hello.

The new Palestinian film opening at Film Forum next Wednesday is worth a look. The Reports on Sarah and Saleem is a generally deft and compelling mix of family melodrama (a Romeo-and-Juliet adultery in contemporary Jerusalem) and bleakly cynical thriller (when the story suddenly becomes about the Conflict as much as the conflict). Muayad Alayan, the director, works with his screenwriter brother Rami like the Tavianis, and between them they have provided an nicely designed work of shifting perspectives. The film could probably be shortened by about ten minutes -- at 127 minutes it definitely feels a bit attenuated -- but for a second feature made under severely straitened circumstances and political pressures, this is quite nice. You can read my interview with the director here.

Jazz is more than just Louis Armstrong, Duke Ellington, Charlie Parker, Ornette Coleman -- the artists who changed the direction of the music in immutalbe, ineradicable ways. It's the talented ones who embroidered on those changes who truly carry a tradition forward. The same goes for any other art.

Consider the case of documentarian Camille Billops. (You can read an excellent summation of her life and career in Art News.) Billops, who died recently at 85, is a filmmaker whose name may be unfamiliar to most of you. Her best-known film, Finding Christina, recounts her decision to abandon her four-year-old daughter and how the two were reunited decades later. It is nakedly emotional and yet reflective, a model of the non-fiction film as self-examination.

But what makes Billops important, beyond that work, is her role as a catalyst and enabler of young black women artists. She was part of that vibrant mid-'60s group that included Faith Ringgold and Emma Moses, women who fought for inclusion in art shows and, when that was denied them, said a simple, polite "Fuck you," and started their own shows and spaces. With her husband and frequent collaborator James Hatch, she created an exhibition space on E. 11th St. in Manhattan that displayed the work of her friends and cohort. The materials they assembled, including an extensive library with thousands of oral histories of artists, has been donated to Emory University. She also mothered a significant journal covering artists of color, Artist and Influence: The Journal of Black American Cultural History,which lasted from 1981 to 1999, a good run for any academic journal.


***********************
If you follow my work at Jewish Week (and yes, you should -- we need the money), then you know that the state of the Israeli film industry is always precarious. Like every other major film-making nation outside of the U.S. and China, Israeli film requires a patchwork of funding from all over the globe (mostly Europe in Israel's case), with a core of the monies raised domestically through an equally ad hoc set of funders, one of the Israeli government.

The results, until now, have been pretty salubrious. But with the elevation of the already controversial Miri Regev from minister of culture to some more elevated portfolio a near-certainty -- assuming the second round of elections in September produce another big majority for Bibi Netanyahu -- things can only get worse. When the Israel Film Center Film Festival kicked off its annual showcase this past weekend, I took its coincidence with the election results as a opportunity to ask some participants what we can expect. Needless to say, their answers were at best guardedly neutral. One couldn't really called it guarded optimism -- nobody is that happy. At any rate, you can read the article here.