Return of a Filmmaker Who. . .

If you missed Lynne Sachs last month (check out my interview here), you have another chance to see a selection of her films, chat with her via Zoom and hear from and about the composer who has scored five of her films, Stephen Vitiello, courtesy of Los Angeles Filmforum. 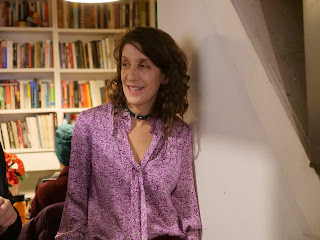 In addition to Film About a Father Who. . . . which is running through February 22, LAFF will be screening several of her earlier works. Sachs will be on hand virtually for a Q&A on February 19 and Vitiello will follow on the 21st. Needless to say, highly recommended!

Getting Inside 'A Cantor's Head'

About fifteen years ago I reviewed a lovely film about one of the unique characters in Jewish music, Cantor Jack Mendelson. Mendelson is a New Yorker by birth, upbringing and temperament, one of the last advocates for the dying art of hazanut, the beautifully filigreed, intensively expressive cantorial recitative that was once the lingua franca of Jewish liturgical music. Mendelson is a powerful proponent of this music, teaching at both Conservative and Reform cantorial schools and, as was clear from the 2005 film, A Cantor's Tale, an engaging, larger-than-life character who takes pure delight in imparting his tradition enthusiastically to anyone who will listen.

In the time since that film, directed by Erik Greenberg Anjou, premiered, Mendelson's life has had its share of chaos, most notably a painful negotiation with the Westchester synagogue at which he served as cantor for many years that resulted, essentially, in his being forced out of the post. As f the film makes abundantly clear, the Temple Israel Center wanted somebody younger and more "user-friendly" than Jackie; the position has been filled at least twice since his contract ended and the congregation is still seeking a permanent replacement.

Inevitably, Anjou had chosen to revisit Mendelson to catch up on his multifaceted career. The result, A Cantor's Head, was completed in 2019, then got caught up in the pandemic, but it is beginning to make its way through the Jewish film festival circuit. Happily, the film has a distributor, ODFD (Oded Horowitz), which released the excellent Israeli doc, Picture of His Life, which I reviewed here last June. 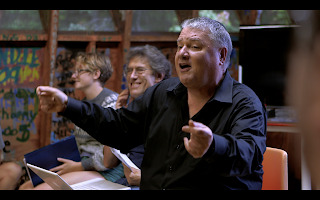 Cantor Jack Mendelson does his thing

Tale was a neat, self-contained story with the focus on Mendelson's warm personal style, his quirky sense of humor and his advocacy for hazanut. By contrast, Head is less formally perfect but in almost all ways a more intense, deeply felt film, one that goes behind the seemingly placid, lively facade that Mendelson maintains as protective coloration. Anjou smuggles out from behind that curtain a lot of painful, difficult material, from the difficulties of Mendelson's relationship with his doting mother to the dreadful after-effects of the departure from Temple Israel Center. The result is a more powerful work than the first film. It exacts a certain emotional price on both its central figure and the audience, albeit one worth paying.

A Cantor's Head is surprisingly melancholy, for all Jackie's effervescence. Although he is in the best vocal condition of his life as he nears 70, and is eager to continue to spread his own unique blend of spiritual intensity and knockabout wit, he is beginning to adjust to the reality that the music to which he has dedicated himself for a lifetime is not sufficiently appreciated in congregations chasing after an elusive (and possibly non-existent) "younger membership." (I'm a synagogue president; I know something about this situation.) To his credit, Mendelson taps into a deep wellsping of anger and frustration and brings out of it passion and humor. We see excerpts from a one-man show he has been touring with, performances with a huge range of Jewish musical stand-outs, ranging from the Klezmatics' Frank London (who also worked on the film's score) to opera star Neil Shicoff, Jackie's teacher for operatic material. We are even, startlingly, allowed to sit in briefly on a session with his therapist. You can see the trailer for the film on Vimeo.

Anjou has directed numerous other Jewish-themed films in addition to the Mendelson diptych, including The Klezmatics: On Holy Ground and Deli Man. We spoke via Zoom a week or so ago, focusing on Erik's relationship with Cantor Mendelson and the immense frustrations falling on indie filmmakers in the age of COVID-19.

Keep an eye out for the film. It should be available sometime this year, I hope.