Back from the Underground

About the only thing more worthless than a blogger's promises would be his bank account. That said, I hope that this post will mark a small return to activity.

It's certainly been an interesting couple of months, as witness my coverage of the NY Film Festival in Jewish Week. I have two pieces that ran during the recently concluded event, which you can read here and here.

And, finally, a shout-out to a new documentary, Thy Father's Chair, a portrait of twin brothers, both Orthodox Jews, trying to deal with their hoarding problem. The primary focus is on their developing relationship with the cleaners, 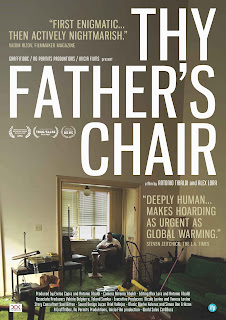 who are specially trained to deal with this neurosis. The result is a markedly compassionate film and as such a blessed departure from the prurient freak-show treatment that the subject usually receives in the media. The film, directed by Alex Lora and Antonio Tibaldi, is currently playing at the Village East Cinema in New York City, and opens in LA on Friday, October 20, at Laemmle’s Music Hall.